7 Days of Black and White

A friend of mine challenged me on Facebook to the 7 days of black and white photos....no people, no explanations!

Other people go thru all their most amazing photos that they have ever taken and post them but I decided to just randomly take a photo on that day....with my phone....and make it black and white.

I'm allowed to provide explanations with the photos on this blog because I said.  I didn't on Facebook and that was a challenge.  I also posted these on Instagram and I put hashtags with them which was sort of cheating because it sort of explained.  Oh well.  I didn't get in trouble or get reported.  Because really...no one cared....and it didn't matter. 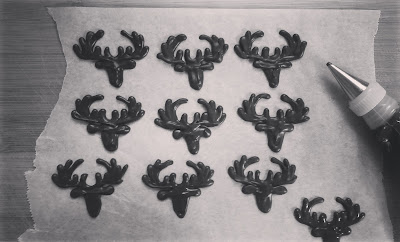 I drew these buck heads...along with a bunch of different designs....to make tracings for royal icing transfers for a cookie class that I was going to start teaching.  I thought the students could make all these tracings with royal icing and then we would flood cookies and place the transfer on top.  It all backfired when I realized that the tracings wouldn't be dried in two hours....they take a long time to dry....and my students would probably have to stay the night.  So I scrapped that idea and went with something else.  And I made some chocolate buck heads for a birthday cake for a guy that is visiting Canada and it's his birthday.  I put maple leafs on the cake too.  And decorated it like it was a birch tree. 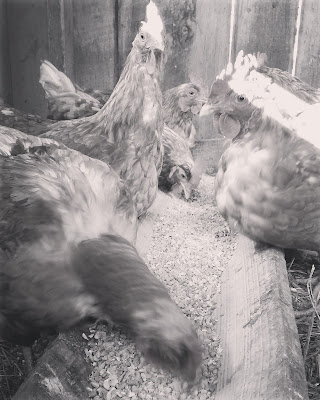 These are some of my girls.  My friends.  My hens.  They give me eggs. 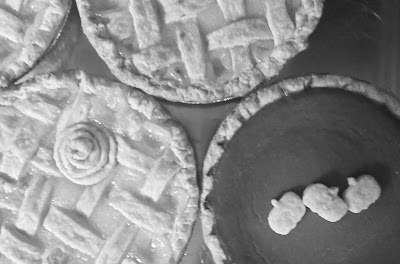 Pies!  Double crust lemon and pumpkin.  I made some for the bake sale at the church. 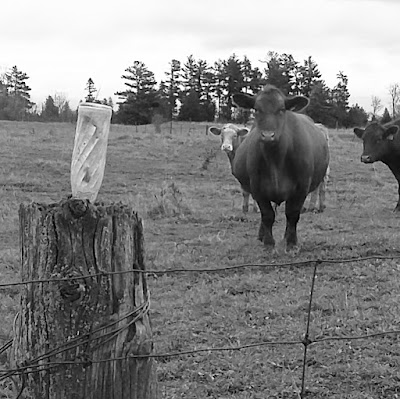 Cows.  In the field.  I was on my way home from volunteering at the school and I remembered that I had to take a photo for the day.  So I stopped and went to take a photo of the cows and then I saw this old pepsi bottle stuck upside down on the post.  I was like....what?  How did that get there?  I just took the photo and posted it. 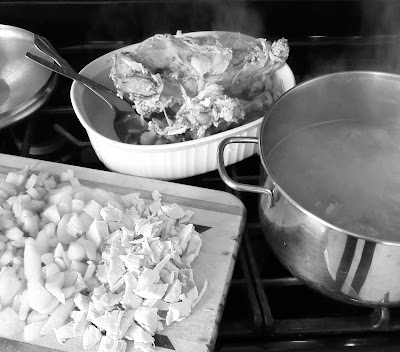 Making soup this day.  I had roasted a meatbird the night before.  It was creamy noodle chicken carrot potato butternut squash soup....basically empty the fridge of all leftovers soup. 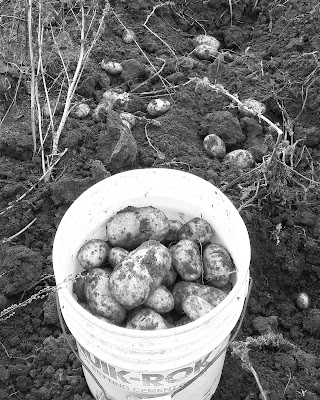 We were digging the last of the potatoes on this day.  Pails and then bags of them.....all put away for the winter. 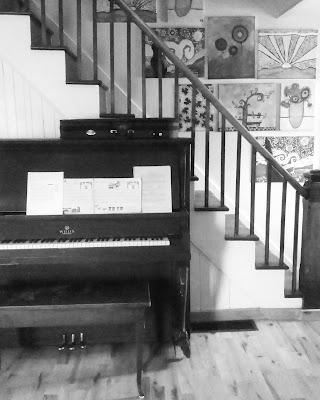 Grandma's piano.  I bought this piano when we were first married.  It was offered to me from a friend who no longer wanted it....she told me that she had bought it from my Grandma years ago.  I jumped at the chance to have Grandma's piano.  It sat in our house and the kids occasionally banged on it but I was too busy to play....or even have it tuned!  We moved to another house last December and the piano remained in the old house....and I kept hinting about bringing it over....but everyone was just too busy.  Then the boys started asking about having a Christmas party....we had one a couple of years ago....a house full of friends and music.  I told them that there would be no Christmas party without a piano.  I went away one Saturday and came home to magically find the piano sitting in our house....and the next day a date was set for the Christmas party!  I've had a local piano tuner in to get it up to speed.  He told me it's a 1919....and in excellent shape....YAASSSS!  So then I got thinking...was it Grandma's piano or Great Grandma's piano?  I asked my aunt and yes...as a matter of fact it's my Great Grandmother's.  It was in the house when my Grandma moved in....after marrying my Grandfather.  I remember Grandma saying....I can't believe you have that old thing in here....when I first bought it.  And now I realize....she wasn't attached to it!  It was her mother-in-law's piano.  My Grandma probably never played the piano....she played the steel guitar and sang on the radio.  She was even a singer in a band called 'The Happy Homesteaders' in Ottawa before she was married.  I just recently learned this at her wake last month!

Also....the boys were unsure whether I would really allow a Christmas house party.  They said that a friend of theirs had an episode where their mother....Irene....told them that if they got the old oil tank out of the basement that she would make them six pies.  They quickly got that oil tank out....the very same day and the pies never happened.  Terry asked me if I was going to pull an Irene?  I just said....wait and see....but get that piano over here!  And they did.

Posted by Dwyer’s Farmhouse at 12:42 No comments:

We celebrated my birthday last week.  I had been wanting to make a chocolate piñata smash cake for a few months now and I thought....yes!....it's my birthday....I'll make myself one! 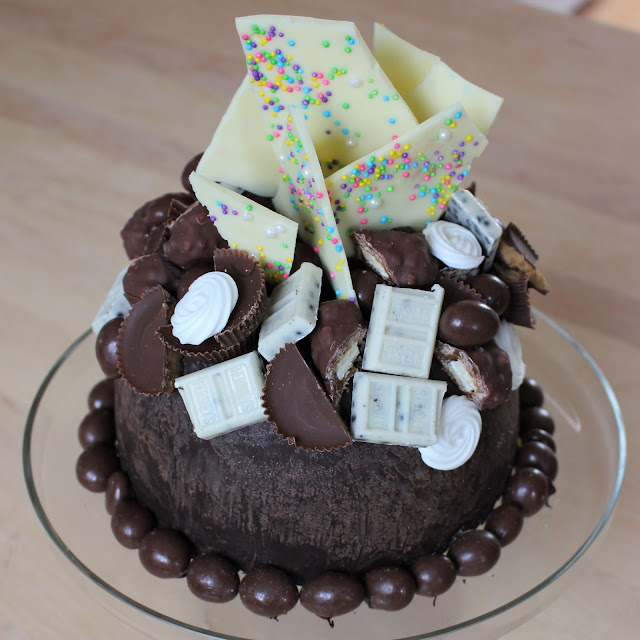 It's a dome of chocolate covered in chocolate and filled with candy and chocolate.  There is actually no 'cake' involved...which is sort of a nice change when you live in a house of cake!

When I was making it I wasn't thinking and I put it on a glass platter.  It's supposed to be smashed......with force!  I was so afraid of breaking the glass platter that it completely ruined the effect of it all.


But it was so yummy it didn't matter anyway!

And the next one I make will NOT be on a glass platter!

The girls have been crafting.  They go on Pinterest and make all this stuff....they can even use the hot glue gun without my help!  They made these snowmen out of socks filled with rice on Saturday...but they soon became just beanbag things to throw around the house.

Then on Sunday morning, one of them is sitting on a chair....arms outstretched like a basketball hoop....and the other one is on the other side of the room throwing this ricebag trying to get it through the 'hoop'.  I stopped and watched....really girls?  Who came up with that game?  Did Jack teach you to do that?....I knew it would be Jack....You are going to hit each other in the face!

I tried my first attempt at making baked meringues on the weekend.  It was easier than I thought....and I made a way more than I needed. 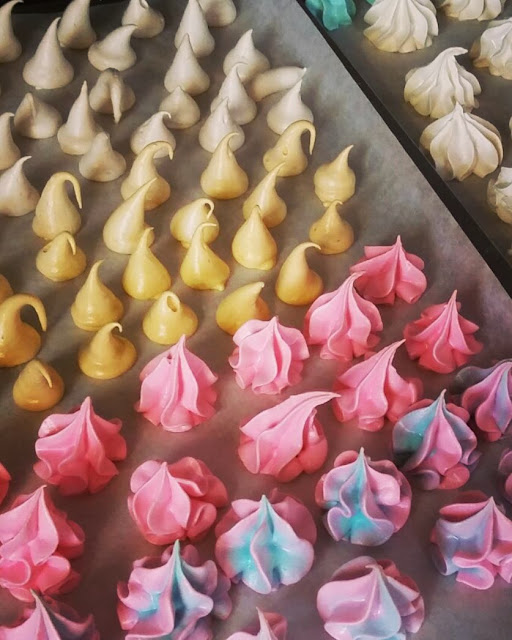 I put them on a drip cake....chocolate ganache inside and out!...with chocolate cake too. 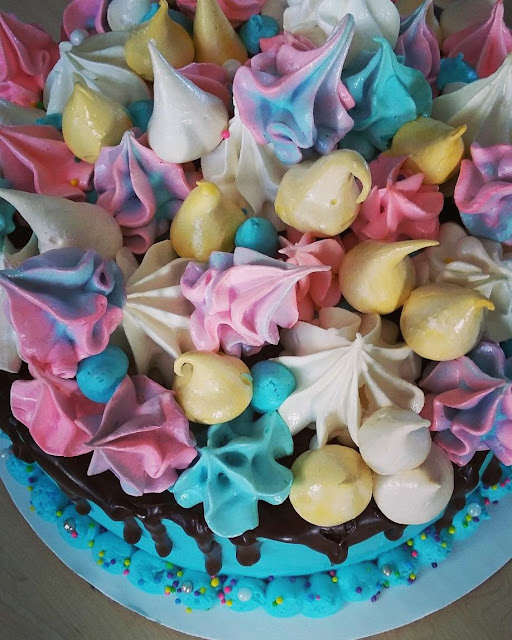 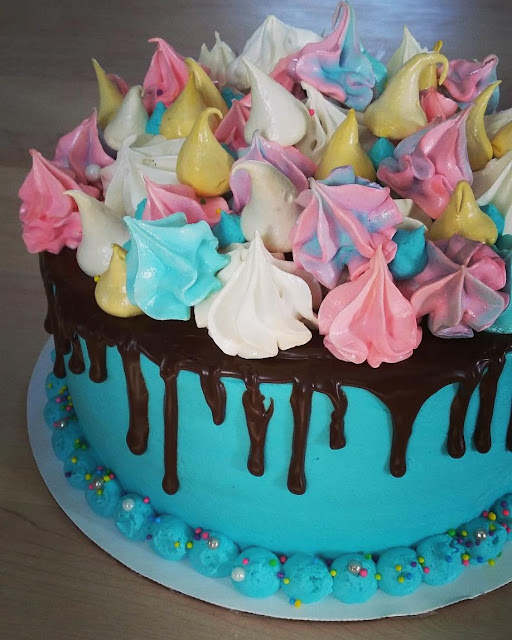 I had some ganache leftover and I put it in a container in the fridge and I actually forgot about it....until I saw Jack take it out and just take a big scoop of it with a spoon....and walk away....at about 9am.

It snowed on the weekend.  Lots.  The girls were quite excited about it Sunday morning.  They were out before Mass playing in the snow....they got soaked.  Then Lydia complained that it felt like she had peed her pants on the way to church because she was all wet.

It's just all the usual random stuff here.  I would try to post more but our internet is extremely slow. Do you miss me?