Hen in the van

It was one of those mornings.  Get moving...get Johanna to the bus stop....get the morning chores done.  The kids had all piled into the van...I wasn't paying attention.  Then we were driving down the road and something was said.  I can't remember what but I knew that there was possibly a live animal in the van.  Finally someone told me that yes, Jack had a hen on his lap.  I couldn't see his lap...he was in the back seat of the van.  I thought they were joking.  But his grin gave it away.  I couldn't believe it.  Those hens aren't that tame.  He had decided that this particular hen had to be moved to the 'other farm'.  We have hens here and hens there.  But we always put the hens in box when we drive with them.  This was crazy.

Then it happened again.  Yesterday morning I get into the van and the big grey rooster is sitting on the floor on the passenger side at Grady's feet.  I asked him to put it in a box but he said that he couldn't find one.  "Just drive, Mom. He'll be fine."

Brenda
Posted by Dwyer’s Farmhouse at 06:55 No comments:

It was a rainy, cold, Sunday afternoon.  Terry and the boys were heading up to Ruby with some hay for the cattle still out on pasture.  I suggested to the girls that we take a drive and visit my Grandma in 'the home'....she is now 90 years old.

Sophie, my 5 year old daughter, said that she was hungry so I made her a snack...peanut butter and jam on bread.  A few minutes later I headed upstairs to change my clothes.  Then I heard her coming up the stairs.....

I hollered "Sophie, are your hands clean?"

I said, "Will you go and wash them please?"

I said, "ummm, in the bathroom sink"...and I was thinking in my head that that was an odd question.

I proceeded to change and then I heard her feet in the hallway coming towards my door.

I said "Are you all ready to go?"  and I look up and saw that she had no pants on.  I was stunned.

"What??  Show me."  I said.  We headed to the bathroom.  I saw water on the counter, on the floor and then the pants hanging on the towel bar.

And I started to laugh.  I was thinking...this dear sweet girl is so good to listen to me.

I told her that there had been a big misunderstanding.....she was suppose to wash her HANDS not her PANTS.  And then she laughed.  And then we got her some dry, clean pants and went for our visit to Grandma's.

Email ThisBlogThis!Share to TwitterShare to FacebookShare to Pinterest
Labels: funnies

A Trip to Brussels Livestock 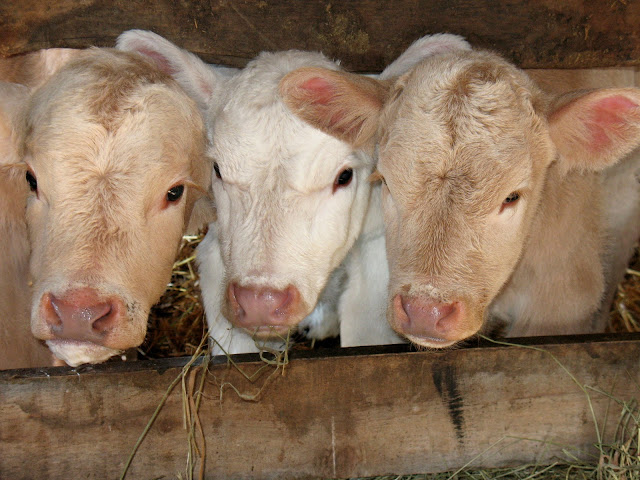 We hired my Uncle Dean's trucking company to transport them to Brussels Livestock Sales Barn.  They left early Thursday morning and they were fed and watered at the sales barn until the sale on Friday.

Terry and the boys make the annual trip to see the sale.  They left early Friday morning with 2 other local farmers.  One being a neighbour of ours that also sent cattle to the sale.  This trip is something the boys really look forward too.  The men are good company...they tell lots of great stories and they are very entertaining.  I should hope so....it's a 7 hour drive to Brussels!

On this particular sale day there were 2400 head of cattle being sold (52 of those were ours).  Bidders at the auction receive a print out of the sellers names, how many head they have for sale, what vaccinations the cattle have received and what kind, if they have been castrated and how, and if they were just taken off grass.  All of these things somewhat influence the value of the cattle and their price.

Then the cattle of each seller are put in groups.  Not all 52 of ours were sold together.  They were grouped by their sex (steers or heifers) and by their breed.  Our cattle were put into 7 groups....with 7 different buyers.  Actually, I just looked at the sheet and one buyer bought 2 of our groups.

The buyers were other farmers that will 'finish' the year olds.  They will feed them grain for a few months and then resell them to the packing plants.

The boys had a great day....shopping at the farm store, watching the other farmers, checking out the Mennonite carriages, visiting with a relative that lives there, eating at the restaurants...

We did the chores.

oh yeah....and we ate bacon and drank milkshakes and made chocolate brownie cookies and covered them with icing and sprinkles.

Brenda
Posted by Dwyer’s Farmhouse at 06:41 No comments:

Email ThisBlogThis!Share to TwitterShare to FacebookShare to Pinterest
Labels: Cows

I'm always amazed how we can turn these: 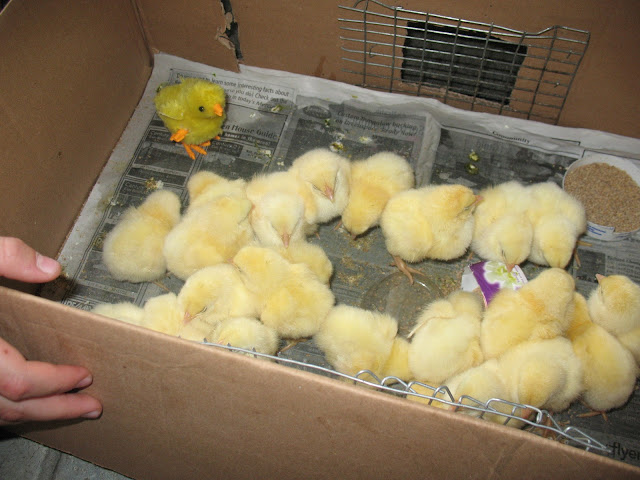 and yes that's a wind up chick in with all the rest of them...because that's the way we roll around here. 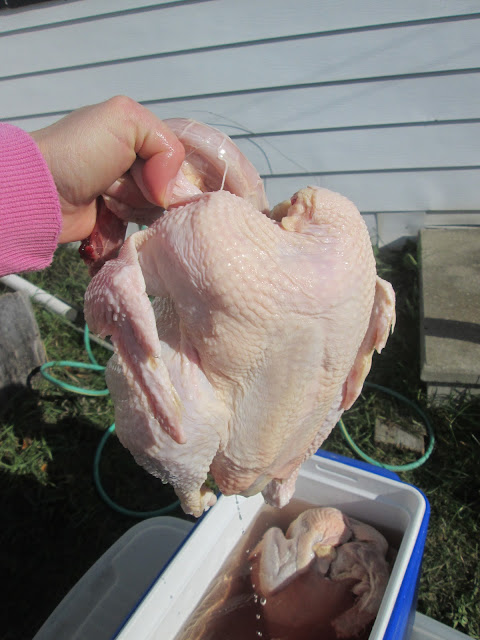 in only a few short months.  I always look forward to this day...the day the meat birds go into the freezer.

These girls take work.  They were fed and watered twice a day...and on the really hot summer days we had to check them for heat exhaustion and give them extra water.

Every night they had to be locked in the chicken house.  You have no idea how many nights I had just gotten into bed and remembered 'the meat birds'.  I'd let out a holler "Did anyone lock in the meat birds?" and if everyone groaned then my darling husband would make the trek out to the chicken house and lock the door.  I couldn't sleep until I knew that my girls were safe....safe from all those wild animals that prowl around at night.

There were a few nights when the boys had already gone to bed and then one of them would get up, come down the stairs, and head straight out the door.  He wouldn't have to say a word to us...we knew where he was headed....out to shut the door on the chicken house.

And then there were the evenings that we had been away somewhere and we'd get home and I'd drive as close to the chicken house as I could and shine the headlights and get that door locked.

The girls had a good life.  They were free range during the day for half of the summer.  Then we got a new pup and quickly realized that these birds needed a pen.  We built a good size one for them and they were happy.  I always dumped the compost pail in their pen and they would feast.

So tonight when we all snuggle into our beds we won't have to worry about the meat birds.  We know that they are all safe....in our freezer!!