The One Piece Snowsuit

It's been cold.  They had another snowday yesterday....only it wasn't because it snowed....it was because of extreme cold.  So I guess it really wasn't a snowday.  I don't know what to call it...it's all new.  This is the first winter that they have been cancelling buses because it's cold.

We were low on food and snowdays mean eating days so first thing yesterday morning I headed to town by myself...the girls were still in bed!  On my way, my Mennonite neighbours were heading to school.  One girl was walking with a black scarf wrapped around her head.  All you could see were her eyeballs.  Her mother had already put all the wash out to dry on the front porch.  It was -26C....-36C with the windchill.  Then I met a wagon load of kids coming with the horses.....they were heading to school as well.  They had black scarves all wrapped around their heads as well only I couldn't see any eyeballs.  Their heads and faces were completely covered.  Carrying on like it was a regular day.....there were no buses cancelled in their world.

Terry got out his one piece snowsuit a couple of weeks ago.  It hangs from a beam by its hood in the basement on the off season and it startled me once...I thought there was a man hanging there.  It a big bulky warm suit.  He has to step into it and zip it from the bottom to the top.

He was thrilled when I snapped this photo at the backdoor. 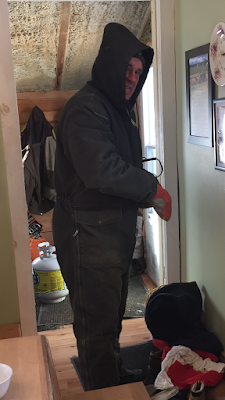 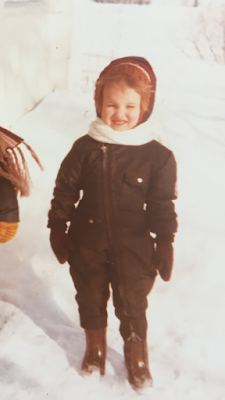 We were talking about one piece snowsuits this past weekend and I was told the story of how a friend of mine got into her snowsuit without going to the bathroom first....like her Grandma had suggested.  She was outside for 2 minutes and had to come back in.....the zipper was stuck and there was no way out....she pissed all over the inside of that snowsuit.  Her Grandma was not too pleased with her!

The zippers always seemed to get stuck on those snowsuits.  I remember thinking that I'd be stuck in it for life!

We were also talking about how they used to wrap the scarf around your neck and then around the top of your head and then tie it.  I hated that....it was so tight that I thought I would choke.

Here is the full picture and you can see that my cousin has his scarf wrapped that way....that stripey thing is a scarf not a hat.  I probably refused to have it put on that way that day. 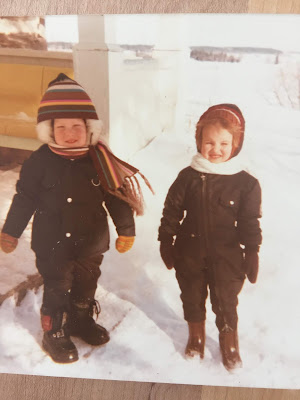 I remember the first time that I had put a scarf on one of my kids and went to visit my mother-in-law.  It was the last time that scarves were used here.  She had a FIT.  She told me to never put a scarf on a child.  They could catch it on something and choke to death.  I grew up with scarves but my husband did not.  Scarves were a BIG NO NO.  There were no scarves in the Dwyer house in Ruby.

Another thing to note about this photo above is that I'm probably not breathing in it.  Not because of the scarf but because of the wind.  The wind takes my breath away.  My aunt used to babysit me...she was the one that probably took this photo.  She would wrap me and my cousin all up and send us outside and if it was windy I would complain and come right back inside.  It drove her crazy because she wanted us outside so she could watch her stories on tv.  But I couldn't actually breathe out there!  They still tease me about it as I always used to say "It's TOOOO WIIIINDAY!"

I still have trouble with the wind.  I even had trouble the last time I went to the hairdresser.  She was blow drying my hair and I couldn't catch my breath.  It's weird.

Speaking of hairdryers....they are working in overdrive in the water bowls this winter.  I just found out that the one that I usually use quit this morning....while in a waterbowl.  I'm currently using one with shit on the cord.  I'm continually buying hairdryers.  It would be nice if REVLON could give me a discount.

Brenda
Posted by Dwyer’s Farmhouse at 14:21