Memories of a Special Meatbird 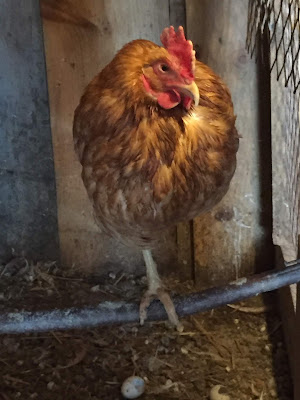 I took this picture in the henhouse last week.

We had an interesting meatbird this past summer.  We had had them for a few weeks before I noticed one that wasn't quite right.  I had went in to the barn to check on them and make sure they had lots of feed.  Most of them were resting and then I noticed this one that was smaller than the others.

It went over to the feeder and then I knew why it was a little smaller.

At first I wasn't sure if I was really seeing what I was seeing.

And then I thought I was going to puke.

Chickens have tongues.  I had never really thought about this before....or even seen one.

And I was looking at one.  A chicken tongue.

It was scooping up feed with the bottom part of its beak and flip flopping its tongue all around.  And eating.

It didn't have the top part of its beak.

It had only half it's beak....the bottom half.

I nearly screamed.  Or puked.  Or both.

And then I thought....how can I help you?

But there was no helping to be had.  It's just the way it was.  And it had survived this long so it would probably be fine.

Until we had it processed...along with all the others.

Because that's why we raise meatbirds.  So we can eat them.