A Big Culvert and a Birthday

Terry worked this weekend.  He usually doesn't work on the weekends but this was an exception.  He works for a construction company....so I can farm....and they are doing this 'culvert job'.  It has a deadline and it needs to get finished.

So, Saturday evening I notice that one of the guys from work posted a photo of the culvert on Facebook.  I mentioned to Terry that it was good to see that the culvert had arrived for the 'culvert job'....I guess I didn't look close enough at the picture.  He said that it didn't arrive like that....there was no way that it could be delivered to the site in one piece.  They have been building the culvert.  It took 4000 bolts and it's 16 feet high....and 3 miles long....no, not really...I forget how long it is.  But it's simply amazing and he said that he could drive his truck through it.  So I asked him if he did and he said no. 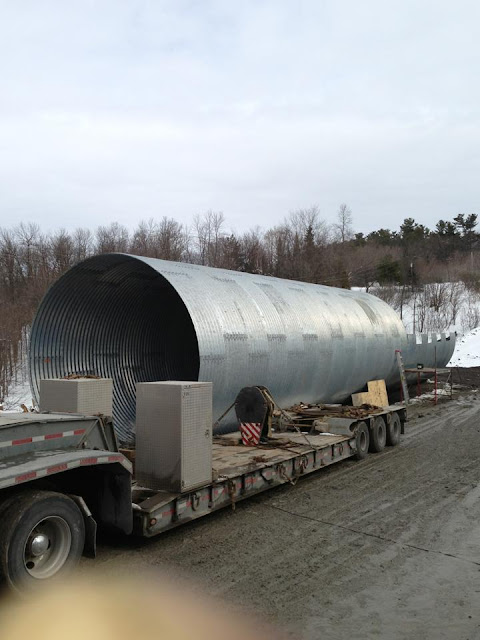 Anyways, while he was away building the culvert, I was taking care of everything here.  We still have cows calving and the sheep are going to start lambing....so everything was being checked several times a day.

Jack came down with the flu on Friday.  It's a crazy flu...Grady had it for nearly a whole week.  He had a fever and he was dizzy.  Jack was laying on the couch yesterday and then he said to me that he felt like he was upside down.  I told him to close his eyes and go to sleep.  He was feeling somewhat better today.

I had a Cake in a Jar order to fill...and it was Johanna's Birthday today....so I made a couple of cakes.  She turned 15 and requested a carrot cake with cream cheese icing.  I was thinking that that was pretty lady like.  She said she was feeling 'old'....but I think I was feeling 'older' as I realised that it's been 15 years since I gave birth to her and I remember it like it was yesterday.  Seriously.  Then she asked if she could start driving the van...you know, just for practise.  I could feel grey hairs growing out of my head.  Seriously.

Email ThisBlogThis!Share to TwitterShare to FacebookShare to Pinterest
Labels: Cake in a Jar, Chores